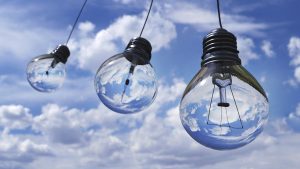 Increasing your lighting efficiency is one of the easiest ways to decrease your energy bills. The average home uses about 5% of its energy budget on lighting. By replacing your home’s five most frequently used light fixtures with ENERGY STAR-rated bulbs, you can save $45 each year on energy costs, according to Energy.gov. Replace all your bulbs and watch your savings grow from there!

Although a less popular choice today (and not readily available), traditional incandescents use a lot of energy to produce light (90% of energy is given off as heat) and are not a market standard like they used to be. (The 60-watt versions were banned from production — or at least those that failed to meet certain energy standards were — in the U.S. in 2014.) Although a trip to any light bulb isle may put more of a pinch on your pocketbook, today’s bulbs are longer lasting and much more energy efficient, so they will save you money in the long run.

Today’s most common energy-efficient lighting choices are CFLs (compact fluorescent lamps), LEDs (light-emitting diodes) and the modern-day incandescent, known as the halogen incandescent bulb, according to Energy.gov. Halogen incandescents meet federal minimum energy efficiency standards but are not the most efficient option.

Energy-efficient CFLs and LEDs provide a much bigger energy bang for your buck. To give an idea of how far we’ve come in lighting efficiency, ENERGY STAR-certified LED light bulbs use 90% less energy than traditional incandescent bulbs, last 15 to 25 times longer and save about $80 in electricity costs (per bulb) over their lifetime, according to energystar.gov. And the average U.S. household has about 70 lightbulbs!

The main difference between LEDs and CFLs is that LED bulbs are much more efficient than CFL bulbs in terms of power consumption and life span, but LEDs are usually the pricier choice.

Energy.gov breaks down types of bulbs:

Halogen incandescents have a capsule inside that holds gas around a filament to increase efficiency. They are available in a wide range of shapes and colors, and they can be used with dimmers.

CFLs are simply curly versions of the long tube fluorescent lights you may have seen in earlier kitchens or garages (or in the workplace). Because they use less electricity than the traditional inexpensive incandescent bulb, they can pay for themselves in less than nine months and save you money in energy costs to boot.

LEDs are a type of solid-state lighting — semiconductors that convert electricity into light. Although once known mainly for indicator and traffic lights, today’s LEDs in white light for general use are one of the most energy-efficient and rapidly developing technologies.