So What Exactly is Renewable Energy? 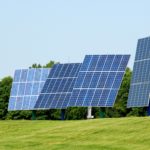 Although its name gives some great clues, “renewable energy” is a buzz phrase many people may gloss right over. Renewable energy, as its name implies, is perpetual energy supplied by natural resources.

The U.S. Energy Information Administration (EIA) says this type of energy is “naturally replenishing but flow limited.” This means that while renewable energy is inexhaustible, it is limited in the amount of energy it can produce in a certain time period.

Renewable energy supplied 12% of U.S. energy consumption in 2020, according to the EIA.

Types of renewable energy include:

Wind Power – Wind occurs because the sun cannot heat the surface of the earth evenly. Today, wind energy — turning energy from the wind into other forms of energy — is mainly used to generate electricity. According to the U.S. Department of Energy, 42 states had utility-scale wind power available in 2021. In addition, the job title of wind turbine technician is considered the fastest-growing American job of the decade.

Geothermal Energy is energy garnered from the heat of the earth. This type of energy can be used in different ways depending on the resource and technology chosen, according to Energy.gov. It can heat and cool homes and buildings through heat pumps; it can generate electricity via geothermal power plants; and it can heat structures directly. The largest geothermal plant in the world is located in California.

Solar Power – Energy from the sun is the most abundant energy resource on earth according to Energy.Gov with 173,000 terawatts of solar energy striking the earth continuously. That’s more than 10,000 times the world’s total energy use. Solar panels, also known as modules, are made of photovoltaic cells made from silicon that convert sunlight into electricity instead of heat. (“photo” as in light and voltaic = electricity)

Hydroelectric Power – as its name implies, hydropower relies on the water cycle for power. According to the EIA, hydropower was one of the first sources used for electricity generation and it is the largest single renewable energy source for electricity generation in the United States. As you drive in parts of the U.S., you may notice dams near power plants. And Wisconsin is not only known for cheese. The first U.S. hydroelectric power plant opened on the Fox River near Appleton, Wis., in 1882.

Biomass is organic material that comes from plants and animals. Examples of biomass include wood, agricultural crops; food, yard, and wood waste in garbage; and animal manure and human sewage. According to the EIA, biomass fuels provided about 5% of total primary energy use in the U.S. in 2020.

[fa type=”info-circle”] Are you a homeowner or small business owner considering a renewable energy installation?

There are questions you need to be able to answer questions you should address with professionals (installers/contractors, insurance agents, and your utility) before committing to a solar, wind, or geothermal system. Use this guide to help you along the way.